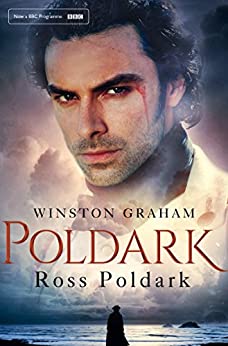 Ross Poldark returms from soldiering in the American war of independance slightly wounded to discover the girl he intended to marry (Elizabeth)  has just married his cousin Francis. His father has died and his house and land are in ruins.

Attempting to bury his bitterness he sets about putting things to rights in the course of which he comes to dislike his class and the inequalities in generates (mildly socialist but not really) so he becomes a bit of a loner and doesn't mix with society.

His other cousin Verity provides some comfort and encouragement, but when he takes in an under age (12) girl (Demelza) as a kitchen maid away from her drunken and abusive father the gossips start and he becomes more isolated..

As she grows and blossoms he ends up marrying and falling in love with her. The book ends with reconciliation between  Ross and his cousins' family (Charles, the father of Francis and Verity has died, and Elizabeth and Francis have a son but are having difficulties due to Francis's gambling). The mine Ross has strated is yielding copper, and Verity is pregnant.

A quick light read. Competently told story but without much edge. Routine characters without a lot of depth apart from Ross and Demelza. Not too sentimental.

Being set in Cornwall the whole "country house, bonnets" aspect is taken down a notch but is still tugging its forelock. The comedy servants in Ross's household (Jud and Prudie) are ridiculous.