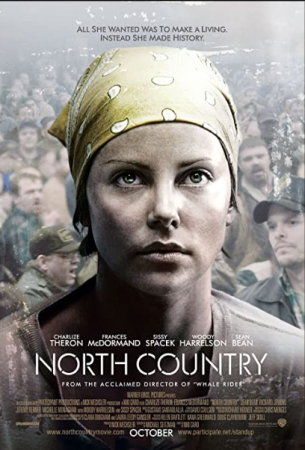 Summary :
Sexual harrassment in an Iopen-cast iron mine leads to landmark legal case. Based on true story.

Josie Aimes leaves her abusive husband and takes her 2 children back to her hometown where her dad, like most of the men and very few women, works in the mine. Dad is vehemently opposed to her taking a job at the mine as it is not woman's work - an attitude shared by all the male workforce.

After arguing with her dad she moves out to stay with an old schoolfriend, Glory (Frances McDermot), who also works at the mine and is a union rep.

The small band of women suffer endless abuse and harrassment which becomes quite toxic for Josie. Eventually Josie is driven to take action, persuading a friend of Glory and Hank's, a retired lawyer who has moved back to the town, to take her case.

Based on the true story of Lois Jenson who worked there for 13 years from 1975 before taking legal action and finally winning after 20 years the film compresses this into a couple of years and over dramatises the courtroom scene at the end with support from co-workers finally emerging at the very last minute.

Good, but not great. Josie not believable and courtroom scenes, particularly at end, OTT
Film list
xbFilms by CrOsborne