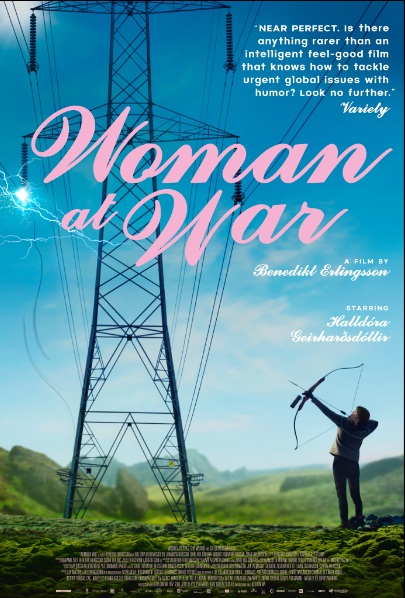 Halla (Halldóra Geirharðsdóttir) teaches signing, is well liked, independent, and cherishes a desire to adopt a child. She is also a secret solo eco-warrior, repeatedly attacking an aluminium smelter built in the mountains, and succeeding in halting negotiations by the government to built a new plant. Although she works alone she has support in the community - notably a civil servant mole in the choir and a farmer in the mountains.

Unexpectedly after 4 years and assuming that she is now too old to be accepted, she hears that she is being offered a girl to adopt from Ukraine who has lost her family in the war (yes there was a war going on well before 2022).

She has a twin sister (also played by Halldóra) who is more spiritual - a yoga teacher - who also applied to adopt at the same time. As she prepares to go to Ukraine to meet the child she undertakes one final action, this time stealing Semtext from a quarry and bringing down a pylon.

By this time the CIA and Israelis are helping the Icelandic government track her down and she has to dodge drones and dogs and helicopters and roadblocks to complete her mission. Unfortunately she had cut herself at the pylon, and having evaded her pursuers, as she is preparing to embark on the flight she sees they are conducting dna tests on all passengers. Fleeing from the airport she hears on the radio in the taxi that her sister has been arrested so she turns herself in.

In a fine twist her sister and the farmer collude in a plan to get her out of jail in time to go to Ukraine pretending to be her sister to collect the child.

As the film ends she is on the bus back from the orphanage with the girl as it breaks down on a flooded road and the passengers all have to disembark to wade through the water.

A great film, and not just because of the eco-theme. In short it's got everything.
Film list