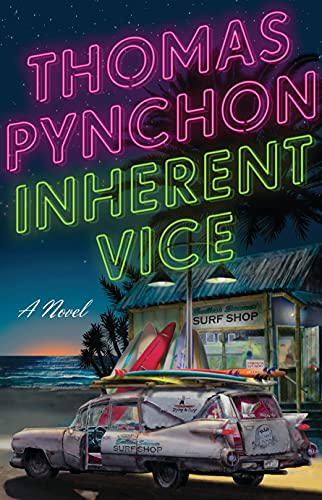 Summary :
Stoner & PI 'Doc' Sportello explores the underbelly of 1971ish LA looking into the apparent disappearance of his ex girlfried and her new property developer boyfriend. It rapidly gets more complicated than that.
Format:
Kindle

With Pynchon's usual rambling cast of unlikelily named charcters, obscure cultural references abound as Doc navigates a russian doll set of shape shifting allegiances across the Los Angeles unreality with a brief side trip to Vegas. Strangely almost everything is reolved by the final page - on one level at least, although a toke on another joint might make the whole framework slip awry revealing something deeper and brighter behind the curtains and painted backdrops of reality.

Pynchon at his best, admittedly covering territory which he has touched on before (The Crying of Lot 49 - although a couple of years later, post Manson Family). A seemingly confusing interlocking set of plot lines that owe a lot to film noir, (actor John Garfield is Doc Sportello's hero and role model) with a late 60's early 70s drug culture overlay that brings to mind both The Big Lebowski (the Cohen Bros film) and Fear & Loathing in Las Vegas.

Around halfway in we discover that Doc is actually only about 28 - somehow that surprised me as he was coming across as my fantasy self, but I suppose I am nearly 70 and the 70s were 50 years ago so perhaps he is my big brother. The relationship between Doc and 'Bigfoot' the LAPD detective suddenly becomes more that of an older cousin and there is a whole potential sub-theme about growing up and casting away youthful things that could lead Doc to becoming the reincarnation of Philip Marlowe.

The writing is emphatically literary, from a master of american literature at the top of his game making it seem entirely natural and 'right' rather than arch or pretentious. The masterly way this is wedded to a very accessible, if at times confusing - but that is the nature of the noirish genre, story and the skill with which obscure, obvious and imaginary cultural references litter the terrain provide an immensly satisfying richness to what is definitely a page turner. No chance of getting bogged down in this one.