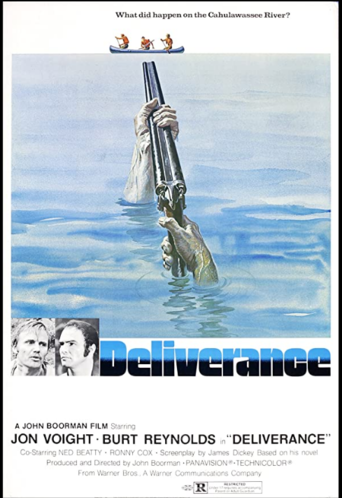 Summary :
A trip into the heart of america goes wrong

I originally saw this in the cinema when it came out, and it has aged very well. Not quite as extreme as I remembered it, but very good buddy drama that rattles along. A standard storyline often told in different variations, but this one is very well executed.

The slightly eco-aware background, although tangential to the story and not fully explored, was new in 1972, and is still highly relevant today.

Burt Reynolds particularly good, not so much for the macho-man which he always plays, but for his collapse in the final third showing the weakness behind the facade.

The white water scenes are very good, gradually building from the tame to the more extreme, however the climb out of the gorge is unconvincing and the day-for-night in that scene is very poor quality on the print we saw.

The treatment of the "mountain men" is slightly insulting perhaps, and presages the appalling approach to native south Americans in Boorman's later Emerald Forest (a one star movie) - but on the other hand the story is being told from the perspective of the city boys who, apart from Lewis, have no empathy for other ways of life. And the cars did get delivered as Lewis said they would be.

I had completely forgotten the ending in the doomed town, which is nicely ambiguous, although what happened to Lewis and Bobby immediately after is not shown as Ed awakes screaming from a nightmare.

Morally it is not clear to me why Drew is the one who died, since he was the one wanting to report the death of the first mountain man, was possibly the least guilty of any of them of doing any harm, and had achieved a connection with the banjo player. It should have been Lewis - which would have led to a more interesting dynamic between the three survivors as the power relations re-aligned.