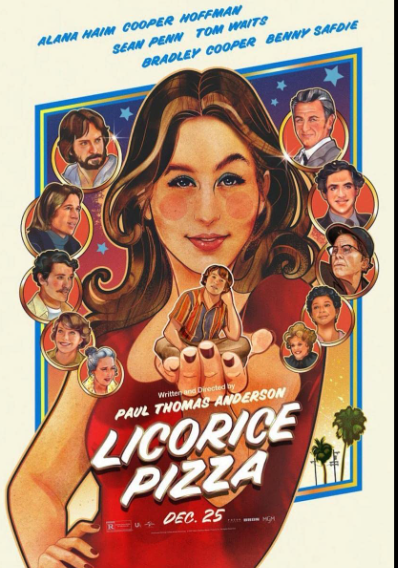 Summary :
15 year old Gary meets 20 something Alana at the school yearbook photo-shoot and they start to hang out together.

Gary (Cooper Hoffman) is a child actor and would be entrepreneur. Alana (Alana Haim) becomes his sidekick and not-girlfriend throough a series of enterprises.  Gary has been in a film "Under one Roof" about a family of 19 kids living together gets a trip to New York to appear on a TV show with the rest of the cast and do some auditions. His mother is busy with her PR business and can't accompany him so Alana acts as his chaperone.

Gary helps out at his mum's PR buiness and stumbles upon a new thing - a waterbed - and starts a business selling them and Alana comes to help. The '73 fuel crisis causes problems and Alana starts to work for a mayoral candidate, Gary hears that pinball machines are about to become legal in California so switches to opening a pinball arcade.

Eventually Gary and Alana admit they are in love with each other and the film ends.

Moments of slight comedy, although the humour is more in the situation. The unlikely relationship between Alana (25 or 28) and Gary (15) becomes believable through Cooper Hoffman's portrail of Gary as 15 going on 30.