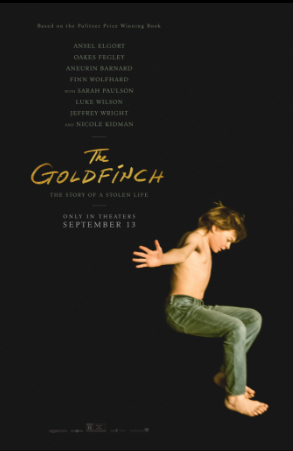 Summary :
Young boy caught in terrorist bombing at Art Gallery looses mother but gains a famous painting, which he then looses without knowing it and eventually it is recovered

Two parallel narratives - that of young Theo (about 12) and older Theo (about 25). The early narrative is largely told through flashbacks. Young Theo surviving bomb, just before he is standing looking at the Goldfinch painting next to an old man with a young girl with red hair. As he regains consciousness he stumbles around looking for his mother and finds the older man sitting dying - he points at the painting (the Goldfinch) on the floor and tells Theo to take it, he also gives Theo a signet ring and tells him to take it to Hobart and Blackwell antique dealers and give it to the man who answers the green bell push.

Theo makes his way home avoiding the confusion of rescuers outside and waits for his mother, she never comes and eventually social services do and arrange for him to be taken in temporarily by a friend of his mother and her family. While there he restarts school and takes the ring to the dealer, Hobi,  There he discovers that the red-haired girl was the old man's ward and she has survived and is recovering in the house. A bond is formed between them.

He is on the point of being absorbed into the family when his father (who was a drunk and left him and his mother) reappears and takes him off to where he lives with his girlfriend on on a barely occupied suburb on the edge of the desert. There he makes friends with the slightly older Boris, the son of a Russian mining engineer also living on the estate.

The pair pass the time experimenting with booze and drugs. Eventually Theo's dad's debts and recurrent drinking catch up with him and he flees drunk and dies in a car accident. Theo runs away back to New York, hoping Boris will come with him - but Boris procrastinates.

In New York he pitches up at Hobart and Blackwell and Hobi takes him in.

In the second narrative adult Theo is now a successful antique dealer working with Hobi having learnt the trade.

Despite being "a critical and commercial failure" this is actually very good. If you've read the book you'll have to make allowances for the need to distil the essence of a long and complex book into a 2 hour film - often this is a recipe for trivialisation, over simplifying, dumbing down and missing the key points in the narrative.

Not so here - the film captures the essence of the book and illustrates it brilliantly - so much so that at some points I "remembered" having seen the film before - which I definitely had not.

If you haven't read the book, then the film stands on its own as a story of growing up; hard knocks  (in a privileged bubble), hard friendships, and life unexpected.