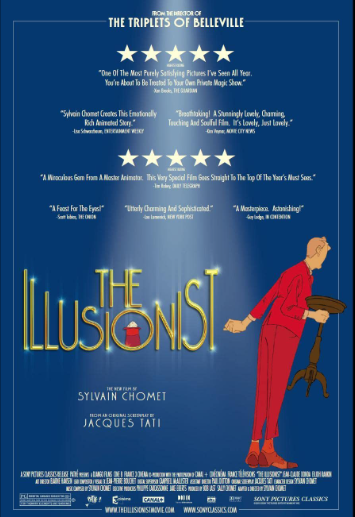 Summary :
A French music hall magician travels on tour to a Scottish Isle and then on to Edinburgh with a young scottish lass in tow.

Story of a magician music hall act (Mr.Tattischeff) going on tour and ending up on a Scotish Island and then a residency in Edinburgh accompanied by a young girl who follows him from the island.

Animated in the same style as Belleville Rendez Vous with a whimsical story based on an unproduced outline by Jacques Tati.

Some gentle comedy moments and some pathos as we watch the decline in fortune of a once-famous performer. The absolute minimum dialogue makes it difficult to be sure what the initial relationship between the girl, Alice, and Mr.Tattischeff is meant to be.

The atmosphere of the 50s UK and the coming of the 60s is neatly illustrated.

Review of "The Illusionist"

I had no recollection of having seen this before when it came out (I've updated the synopsis and other details which were missing) but it still retains its charm and gets the same rating 12 years later.